The Best Disk of Nov.2015(Record-Geijutsu Journal)

" Chromatic fantasy and fugue" played at the beginning symbolizes her image of Bach. In spite of virtuosic nature of the piece, she goes on somberly, speculatively. In "Fugue", beginning with tranquility, clearly standing voices, she plays dynamically in sound and rhythm. Also "Fantasy and Fugue" is played spiritually with articulation of utmost delicacy suppressing unnecessary sublimity. In "Ricercar a 3" she goes further into the depth of the music. In " Capriccio" she expresses the inner aspects of the characters and minute affects of the scenes. In "Four duets" the balance between simplicity and diversity is well maintained. "Italian concerto" is of standard interpretation, but her play with crisp, stable, and well-balanced transparent sound was really enjoyable. The last "Ricercar a 6" closes the album with resonance of profound fulfillment.

This album contains important J. S. Bach's keyboard works other than "well- tempered" and a series of suites, including particularly "Ricercar a 6" from Musical offerings, which is known for its extreme technical difficulty. All the pieces are played placidly and profoundly with solid technique, excluding any showiness, going deep into the music. The listener is impressed by its profound spirituality. Worthy of special mention is the unambiguity of voices from the minimal use of pedal. 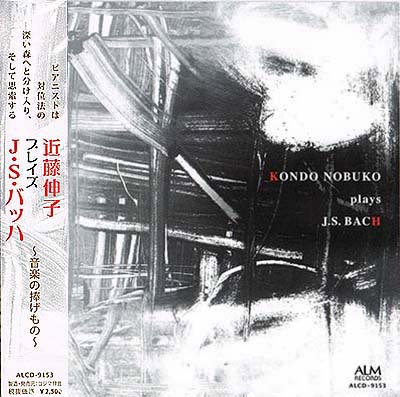 Kondo Nobuko mentions in her program note that playing toccatas is sort of riding a runaway horse. Her play is so dynamic but it is not of sporty dynamism of riding but rather philosophical and speculative dynamism both of which are strangely in balance.

BWV912 in D major starts brilliantly, and goes on with solid articulation and well-modulated rhythm, with full of emotional contrast. Key touch is brisk, brilliant, but the slow passages in recitativo is abundant in lyrical beauty. BWV913 in d minor begins fantastically with a bit of ennui followed by fugue with good articulation and clear voicing.

Generally speaking, her music is sophisticatedly polished and analyzed at the level of each sound, with assured interpretation and structuring, leading to spiritual robustness and lyrical brilliance. Her Bach is in a line of tradition of " Neue Sachlichkeit" in Germany which is now rarely experienced.

There exists few albums containing the whole set of 7 toccatas and this recording is precious. Dynamic and smooth phrasing and long tenuto enhance effectively the complicated patterns of double fugues more distinct than harpsichord. She has made the best use of capabilities of piano to draw the appeal of toccatas.

The Toccatas have no strong presence in Bach's keyboard works because of a bit of fray in its configuration, but Kondo has turned this flaw into the degree of freedom in her performance. Her performance is somber but is making the most of capabilities of modern piano with a latitude of timbre and dynamics to draw the essential charm of toccatas. The program note is also rich in content.

- An echo of fragrant fin-de-siecle romanticism -

"Kondo Nobuko Plays Schönberg, Berg, Webern" sounds very attractive. The piano works by Schönberg, Berg, and Webern display a wide variety of characteristics along with a respective temporal transition. Kondo analyzes these varieties from the viewpoint of mechanical dynamics and tonal configuration, and brings out their differences.

"Three piano pieces" by Schönberg is played with an exquisite balance of emotional and intellectual aspects, and we can feel the transition in affection and pulsation of the music. She takes advantage of the modern piano with its rich harmonics, in a way that is reminiscent of Peter Selkin's rendition. This approach also seems to be effective in "Sonata" by Berg, which echoes of fragrant fin-de-siecle romanticism, with vibrant tones and an urge to proceed. "Variations" by Webern is so beautiful; it is like a musical kaleidoscope with subtle romanticism and a sharp contrast in texture. Overall, this is a well-organized album and is at the level of perfection. This album will definitely stand out.

This album is an anthology of the piano works of the Second Viennese School (Neue Wiener Schule), mainly of Schönberg. The microphones are placed in proximity to the piano, reflecting her intention of going further into the core of the music. While the timbre is not of beauty, particularly in "Three Piano Pieces" (Op. 11), and the sound is seemingly coarse and submissive, the music is powerful, with energy drawn from the composer’s pathos, and which is embedded in the touch and in between the lines of the score.

In "Six Pieces for Piano" (Op. 11) Kondo infuses diverse images into each piece, and produces something which is taciturn with a bit of sophistication. In "Five Pieces for Piano" (Op. 23), her play is stable and robust, expressing lyrical fragrance. As she writes in the program note, the third piece of the passacaglia style is the most complex piece among the five pieces, with respect to the tone sequence structure, but she plays it with clarity, highlighting the minute components. The most difficult piece, Op. 25, which is totally written using the dodecaphonic technique, is played with robust pianism and abundant expression. The piece of Webern is played with a much more delicate and sophisticated touch. In Berg's Sonata Op.1, the internal strength, clear interpretation, and exquisite variation in tempo evokes a vertiginously vibrating emotion.